The Latin Jazz in the Park, Saturday  August 11 was headlined by Jose Rizo’s Latin Band, “MONGORAMA”

Pots and Pans were being “cooked-on” and at a high temperature in my opinion. The mood was set just right as the Weather was low 80’s degrees. Sponsored by LACMA Programs  and KKJZ FM 88.1FM. I have seen this wonderful band many times over the years, in various city-wide festivals. But somehow this particular day was special. I was still celebrating my birthday from August 7th which fell on a Tuesday. I was ready with my light snacks and beverages . Jose Rizo hosted the afternoon sets by introducing the band and tunes that were being played , most of which were from the new CD , Baila Que Baila!  Featuring young violinist, Dayren Santamaria, and Justo Almario tenor sax  Vocalists & Conguero Alfredo Ortiz & James Zavaleta lead vocalist.. They were the jet fuel of this band for two hours of Latin soul and pyrotechnics.  the X factor all afternoon were the dancers who were relentless, never stopped, never gave in an inch . as long as the band played , dancers had A-game moves on the dance floor. At one time the floor was so pack , They just started dances in aisles and pathways. Beautiful people of Southern California (Los Angeles) were out in droves with babies, Pets and, even the eclectic and bazaar! All of this added up to a wonderful day of fun and eye candy. 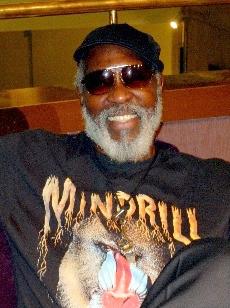 We ask that you light a candle, hum a song, play a drum or say a prayer as we remember Lou. vocalist,trumpeter,composer,percussionist and co-founding member of Mandrill.

KCSM Jazz 91 invites you to spend the day with us at           Jazz On The Hill! This day-long celebration is our gift to you, our jazz community, to thank you for the support you’ve given to your favorite jazz station: KCSM 91.1 FM. Join us at College of San Mateo campus for live jazz with a great line-up of musicians who cover many genres of jazz from straight-ahead, blues, to Latin and more!

Again we will have two music stages! The main stage will be located on the lower mezzanine in front of the library steps, with seating alongside the fountain and plenty of lawn seating…bring your picnic blanket, umbrella and come early to claim your spot!
The 400-seat Little Theater is again the venue for the Youth Stage which will showcase the next generation of jazz musicians.

ARTS & CRAFTS AND FOOD TRUCKS, TOO!

It’s a long day, so come hungry! There will be a variety of food trucks on site … check back soon as we begin to add the types of food available. We will also serve beer and a variety of great wine from Domenico winery. No matter what your taste….we’re sure to have scrumptious food and drink to wow your palate.
In addition to our food vendors, there will be local artisans showcasing their wares, and other organizations will also have information about local businesses that might interest you. Check back soon, we will be adding the list as they si

repost from the JAZZ  DADDY  Blog  by Justin Scoville

To loosely paraphrase Jazz critic Gary Giddins, Kenny Dorham (1924-1972) has become synonymous with anything starting with “under”–underrated, understated, under-appreciated, etc. Dorham was a phenomenal bop trumpet player who was game enough to record with some of the most adventurous artists of his time, from early Thelonious Monk, to Cecil Taylor, to Andrew Hill.

Leading up to 1959, and in the decade or so to follow, Jazz history is often viewed through the lens of two giants: Miles Davis and John Coltrane. Because their influence was so enormous, it is easy to forget that many Jazz musicians were quietly advancing the music in significant, albeit more subtle, ways. Dorham was one of those overlooked artists.

As a composer, Dorham was an early pioneer of fusing Afro-Cuban elements into Jazz. He penned numerous standards (Blue Bossa, Una Mas, Lotus Blossom) that were Latin-tinged, but laced with forward-thinking harmonies and the blues. (Side note: I view Tom Harrell as a direct successor of KD, both as a trumpeter and composer).

While Miles Davis exposed the fragility of the trumpet with his “walking on eggshells” approach, Dorham explored an entirely different conception of the instrument that hearkened more to the reed family than to brass (although Dorham could blow brashly when he wanted to). Beyond his unique sound, Dorham’s polished yet organic style of articulation gave his improvisations a fascinating combination of edginess, humor, and laid-backedness.

One year removed from his own definitive recording released in 1959 (Quiet Kenny), Dorham’s Jazz Contemporary album puts all of his strengths on display with a sympathetic supporting cast. In particular, the rhythm section of Buddy Enlow (drums), Butch Warren (bass), and Steve Kuhn (piano) lay a fascinating groundwork for Dorham and baritone saxophonist Charles Davis (who later played extensively with Sun Ra). Warren’s aggressive bass lines, combined with Kuhn’s very modernistic comping and Enlow’s fiery snare, make for interesting listening. Jimmy Garrison holds down the bass chair in place of Warren on a few tracks as well.

I spoke earlier in this article about the influence of Miles Davis and John Coltrane. It would be easy to frame this album as having been recorded in their respective shadows. Enlow was a disciple of Davis’ drummer Philly Joe Jones. Kuhn would go on to briefly join Coltrane’s quartet, and was probably seen at this time as a successor to Davis’ preferred pianist Bill Evans. “In Your Own Sweet Way,” which is track #3 on this album, was also coincidentally track #3 on Davis’ iconic Workin’. And Jimmy Garrison, of course, went on to be Coltrane’s bassist through the 60’s. Charles Davis, Dorham’s saxophonist here, shows a strong Sonny Rollins influence, and Rollins was one of Miles’ early partners in crime. Despite all of those facts, I prefer to view Kenny as his own man.

“A Waltz” kicks off the album with KD swinging in 3/4, something Miles attempted sparingly in his career. “Monk’s Mood” is a challenging ballad that gets a lot of burn time with the group’s expert interpretation. “In Your Own Sweet Way” is an interesting contrast to Miles’ group rendition, with Charles Davis and Kuhn blowing furiously over the labyrinthine chord changes.

To me, “Horn Salute” is the highlight of the album. It’s a Dorham original that ingeniously blends stop-time melodies with challenging background harmonies. I believe this tune is a definite foreshadowing of Dorham’s later works with Joe Henderson. “Tonica” and “This Love of Mine” close out the album in a hard-swinging fashion.

While Jazz Contemporary may not be the most definitive Jazz album of the period, or even of KD’s discography for that matter, it still represents an interesting transitional phase for the underrated trumpeter. Each member of the band would go their separate ways to successful stints outside of Dorham’s employ, but it is reasonable to believe they all were indebted to KD for the opportunity to play in a swinging, original group.

Los Angeles Just completed hosting their 19th annual Central Avenue Jazz Festival on the very historic Central Avenue between Vernon Ave. and Martin Luther King Jr. Blvd  . The city was a gracious host to some of the most colorful  and diverse audiences in the country. The Music as usual was at the forefront of the two-day festival, among the many  community organizations chipping in to balance off the activities.    ALL FREE !!! There were events for the youth at a special Pavilion that featured arts & crafts, face painting and interactive musical activities.

Large local artists exhibit were made available for purchase.

Musically  speaking, there are no other events better than Central Ave Jazz fest. with the future of jazz clearly in great hands of young  musicians like, Kumasi Washington,Ray Goren, Mekala Session, Darynn Dean, while heavy anchors like Ernie Andrews and the great Gerald Wilson, who “collectively” has held down the LA Jazz scene over 70 years.   Gerald traditionally closing out the festival on a high note  with the young tenor saxophonist , Kumasi Washington’s solo.

Scenic views of the Festival!! 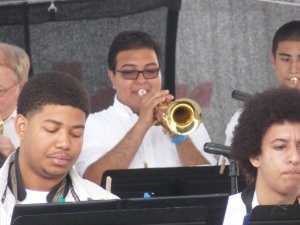 The great Billy Mitchell on Piano with Ernie Andrews

He and Los Angeles–based Eyedentity have performed at leading clubs and festivals around the world playing to fans new and old.

All about Jazz writes of Ernie Watts: “He is one of the greatest tenor saxophonists, at the top of his game.” Two-time Grammy Award winner Watts is one of the most versatile and prolific saxophone players working today. A 50-year veteran of the saxophone, Watts picked up the instrument at age 16. Since then, he has been playing professionally, initially while still attending school. Watts has been featured on over 500 recordings by artists ranging from Cannonball Adderley to Frank Zappa, always exhibiting his unforgettable trademark sound.  Watts Concert kicks off at 6:PM for two lively sets of Jazz to launch your weekend .

Presented as part of Jazz at LACMA taking place every Friday @5PM .  Check out the full schedule of upcoming concerts. click link below

This past weekend I missed what I used to make every year when I lived in East Bay-Oakland area. The Malcom X Jazz Festival in San Antonio Park, Oakland California. this event is always produced by the Eastbay Arts Alliance  Celebrating Malcom X birthday. 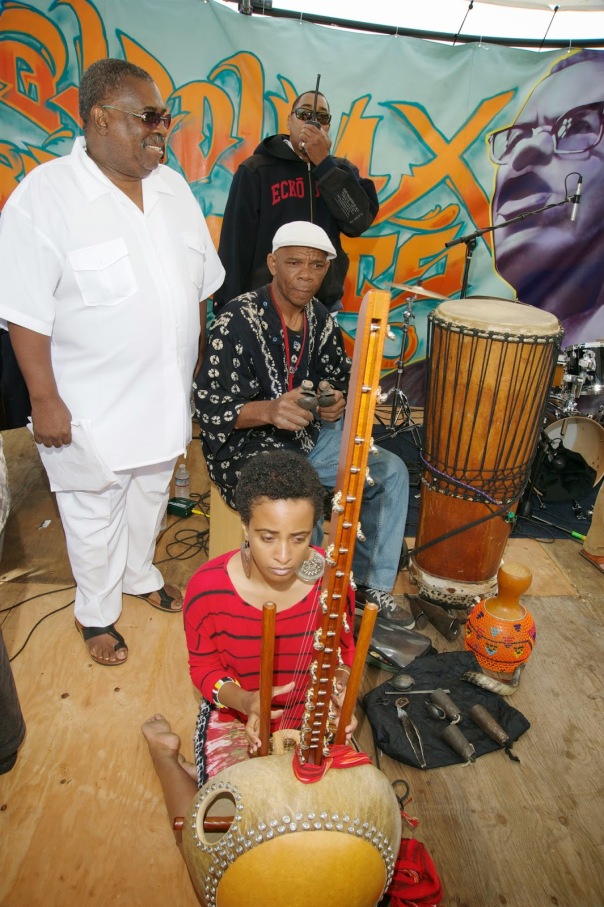