Mr. Jones, a fixture of the Coltrane group from late 1960 to early 1966 and for more than three decades the leader of several noteworthy groups of his own, was the first great post-bebop percussionist. Building on the innovations of the jazz modernists Kenny Clarke and Max Roach, who liberated the drum kit from a purely time-keeping function in the 1940’s, he paved the way for a later generation of drummers who dispensed with a steady rhythmic pulse altogether in the interest of greater improvisational freedom.

But he never lost that pulse: the beat was always palpable when he played, even as he embellished it with layer upon layer of interlocking polyrhythms.

The critic and historian Leonard Feather explained Mr. Jones’s significance this way: “His main achievement was the creation of what might be called a circle of sound, a continuum in which no beat of the bar was necessarily indicated by any specific accent, yet the overall feeling became a tremendously dynamic and rhythmically important part of the whole group.”

But if the self-taught Mr. Jones had a profound influence on other drummers, not many of them directly emulated his style, at least in part because few had the stamina for it. None of the images that the critics invoked to describe his playing — volcano, thunderstorm, perpetual-motion machine — quite did justice to the strength of his attack, the complexity of his ideas or the originality of his approach.

Elvin Ray Jones was born in Pontiac, Mich., on Sept. 9, 1927. The youngest of 10 children, he was the third Jones brother to become a professional musician, following Hank, a respected jazz pianist who is still active, and Thad, a cornetist, composer, arranger and bandleader, who died in 1986.

He began teaching himself to play drums at 13, but he had lost his heart to the instrument long before then. “I never wanted to play anything else since I was 2,” he told one interviewer. “I would get these wooden spoons from my mother and beat on the pots and pans in the kitchen.”

After spending three years in the Army he joined his brothers as a fixture on the busy Detroit jazz scene of the early 1950’s. As the house drummer at a local nightclub, the Bluebird Inn, he worked with local musicians like Tommy Flanagan and Kenny Burrell as well as visiting jazz stars like Charlie Parker and Miles Davis.

In 1956 after briefly touring with the bassist Charles Mingus and the pianist Bud Powell, Mr. Jones moved to New York, where he was soon in great demand as an accompanist. He occasionally sat in with Miles Davis, and he later recalled that Coltrane, who was then Davis’s saxophonist, promised to hire Mr. Jones whenever he formed his own group. In the fall of 1960 Coltrane made good on that promise.

Working with Coltrane, a relentless musical explorer, emboldened Mr. Jones to expand the expressive range of his instrument. “My experience with Coltrane,” he told the writer James Isaacs in 1973, “was that John was a catalyst in my finding the way that drums could be played most musically.” He in turn influenced Coltrane, Mr. Jones’s ferocious rhythms goading Coltrane to ecstatic heights in performance and on recordings like “A Love Supreme” and “Ascension.”

Coltrane’s quartet helped redefine the concept of the jazz combo. Mr. Jones and the other members of the rhythm section, the pianist McCoy Tyner and the bassist Jimmy Garrison, did not accompany Coltrane so much as engage him in an open-ended four-way conversation. Audiences found the group’s intensity galvanizing, and many critics shared their enthusiasm.

But despite its popularity, the group divided the jazz world. John Tynan of Down Beat magazine dismissed its music as “anti-jazz,” and others agreed. Mr. Jones’s drumming, a revelation to some listeners, was dismissed by others as overly busy and distractingly loud. 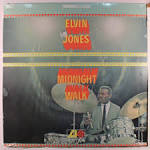 Mr. Jones left the group in March 1966, shortly after Coltrane, as part of his constant quest for new sounds, began adding musicians. Although he never publicly explained why he left, he was widely believed to have been insulted by Coltrane’s decision to hire a second drummer.

Mr. Jones spent two weeks with Duke Ellington’s big band and briefly worked in Paris before returning to the United States, where he formed a trio with Garrison, who had also recently left Coltrane, and the saxophonist Joe Farrell. That group was short-lived, but Mr. Jones continued to lead small groups for the rest of his life. Over the years many exceptional musicians passed in and out of the Elvin Jones Jazz Machine, as the ensemble came to be known in all its various incarnations, and the group performed regularly all over the world and recorded prolifically.