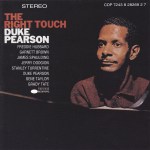 Jazz pianist and composer who also had experience as producer,bandleader,arranger and A&R  man for Blue Note in the 1960s and beyond. His talent and perseverance help shape the Hard Bop  direction for Blue Note records.

“Even after 30 + years past his death, his legacy has to fight for any mention on broadcasts, books on jazz, and so-called jazz historian essays.”

The last few years,there has been rumblings of exhibits,Hall of Fame inclusion in Georgia, etc.so far,its only been conjecture and wishful thinking on the part of family members and fans. IMHO, Duke Pearson was too talented, and special to not be included in any Hall of Fame, museums or major jazz exhibits.Some of my favorite music in Jazz  just happens to be music composed, produced or arranged by Duke Pearson. Jeannine by Eddie Jefferson, & Donald Byrd/Pepper Adams group. The Phantom, Wahoo, Amanda, Sweet Honey Bee…