Drew was born in New York City in 1928 and received piano lessons from the age of five. Drew’s first recording, in 1950, was with Howard McGhee, and over the next two years he worked in bands led by Buddy DeFranco, Coleman Hawkins, Lester Young, and Charlie Parker, among others.  After a brief period with his own trio in California, Drew returned to New York, playing with Dinah Washington, Johnny Griffin, Buddy Rich, and several others over the following few years.  He led many recording sessions throughout the 50s, and in 1957, He appeared on John Coltrane‘s  classic Blue Note album Blue Train.

Drew was one of several American jazz musicians who settled in Europe around this period: he moved to Paris in 1961 and to Copenhagen three years later.   While he sacrificed much of the interest of the American jazz audience, he gained a wide following across Europe.

Kenny Drew was a well-known figure on the Copenhagen jazz scene, recording many sessions with the Danish bassist Niels-Henning Ørsted Pedersen.  “Living in Copenhagen, and travelling out from there,” Drew remarked, “I have probably worked in more different contexts than if I had stayed in New York, where I might have got musically locked in with a set-group of musicians.  This led to a grand recording with Dexter Gordon ,  “One Flight Up” another expatriate living in Europe at the time.

Kenny Drew and Dexter Gordon appeared on screen in Ole Ege‘s theatrically released hardcore pornographic film Pornografi – en musical (1971), for which they composed and performed the score. Drew died in 1993 and was interred in the Assistens Cemetery in Nørrebro, Copenhagen. He even have a street named after him in southern Copenhagen, “Kenny Drews Vej” (Eng., Kenny Drew Street). Drew has a son, Kenny Jr. who’s also a Jazz pianist. 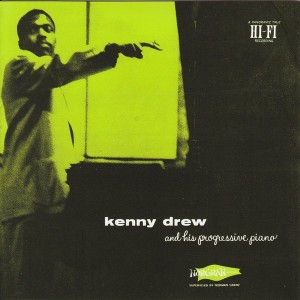 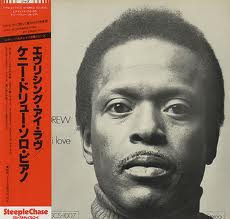