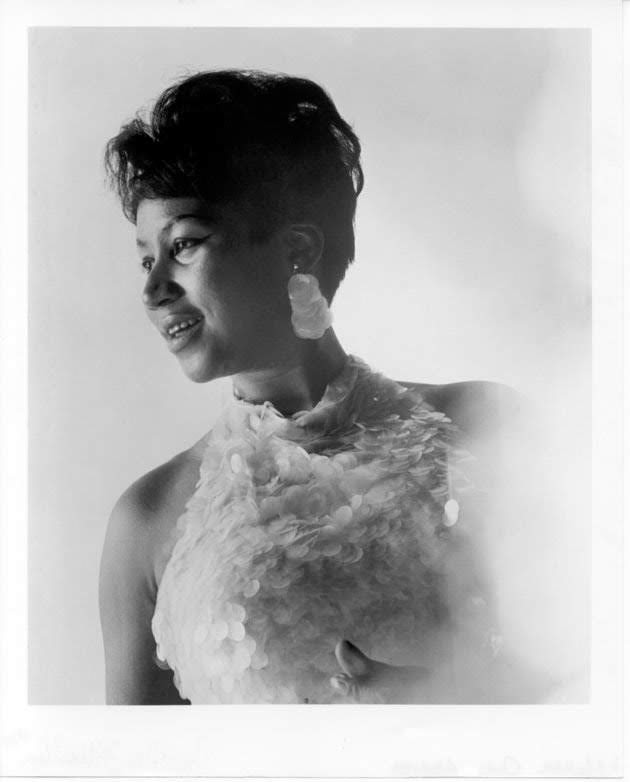 As a baby boomer, I grew up 1950s-60s, being only 8 years behind Aretha. I was digging on all that good music from those people my parents liked, James Brown, Jackie Wilson, Brook Benton, Dinah Washington, BB King, Bobby Blue Bland, Lloyd Price. Then the Motown thing hit L.A. starting with a group from Detroit named the Miracles (Shop Around 1960).

but, I also begun to get into jazz as I got older and started playing an instrument. From early 1961 to 1963, this Motown sound was picking up steam and other entertainers from Detroit, Chicago and New York were spawning new and younger acts. A couple more years passed with no acts “jumping out” there like Motown was producing at the time. Hits from Mary Wells, The Marvelettes and The Temptations really shot out there with My Girl (1964), that was followed by the Supremes and Martha & the Vandellas, “Dancing in the Streets” & “Heat Wave”. This was the phenoms from Motown that was eating up all the airwaves on the radio back then.  But, by 1966, other “Acts” started to come into sharp focus.

The Impressions, Otis Redding, Wilson Pickett and even Soul Brother #1, James Brown was sounding different. One evening, I was watching a local TV dance show, and this young spunky, bouncy  singer came on with this big bellowing voice.. WoW!! Who is that?? I never heard again from her until 1967, when she came on the radio with “Respect”… Man-o-Man!  I immediately recognized that voice from only a year past , this was different. She sounded like she was speaking truth, had pain from her experiences and I was relating big time.

Before  I could get to school that morning,  I heard that song about 5 times in less than an hour, by 3:pm  after school, it was all over the radio. It was on the lips of older and young people..R_E_S_P_E_C_T, Take care , TCB!! It was on like popcorn then . Her song made it to #1 in the US in 1967. This song charted to number 2 in Canada, number 10 in the UK, number 11 in the Netherlands, and number 15 in Australia. This was the beginning of a musical legend. As far as I was concern , and many of my peers agreed with me, she was as big as James Brown.. Finally we had a Queen of soul go with the King of Soul ,JB. The consistency and relentless  energy and ability to take you to church whether you wanted to go or not.

She had all that stuff inside her playing and singing you would hear in Church coming up in the black community. She had that extra gear. Her signature “hollers” was like saying “Amen to what she was putting down on the record”. That even transferred over to her live shows on TV’s Ed Sullivan, Merv Griffith and the Johnny Carson shows.

Rolling like a runaway train with hit after hit, leaving high water marks everywhere she appeared…as part of the black political and social experience, we adopted Aretha’s phrases from her songs, TCB, RESPECT, a Do Right Woman or Man. 1968 rolled into place with a plethora of hits like Dr. Feel Good, Think, Chain of Fools, and Ain’t No Way. Included in that was a song she sung at Dr. Martin Luther King Jr.’s funeral.

I know I will never forget about Aretha Franklin. I just can’t wrap my head around the fact that, she will never grace a stage on earth again. I feel like I’m the lucky one, because I saw the Queen “blow-away” all comers, top shelf entertainers and anybody, male or female from that perch multiple times, over decades. 40+ Grammy nominations with 18 Awards in her quiver. Masterful achievements.

As I get ready for my 50th high School reunion, I know we will be playing lots of Ree-Ree from her debut hit, “RESPECT” to her last recordings unreleased yet. There are only a handful of miracles, not the Motown kind, but could include them also on another level. But, artists like Billie Holiday, John Coltrane, Charlie Parker, Ray Charles and Stevie Wonder..well there’s your handful. ha ha ha!! The mold was broken and never again will there be another.  Good bye Queen, I salute you with my favorite “Retha” cut…ENJOY!