“The Stage, (pun intended)” was set 9:pm on Feb 9th 2019 in Los Angeles, where the bass master, Juini Booth landed for his WORLD STAGE DEBUT. Booth a jazz icon starting when he sprung on his own for New York in mid-60s as a teenage bassist for Sun Ra and a host of other greats. later iconic performances and recordings with McCoy Tyner, Woody Shaw and Gary Bartz’s Ntu-Troop just to name a few. 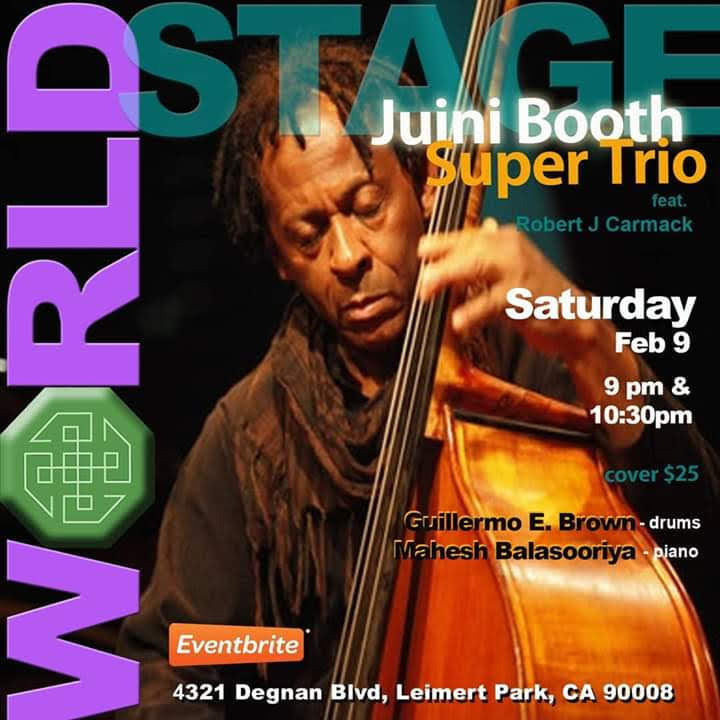 Booth powered into the world stage as part of the World Stage Black History month loaded schedule of Jazz greats. featured on spoken word and dramatic performance in the select works and poetry of SUN RA , Mr. Robert J. Carmack-MFA ” BLACK as 1000 Nights: The Artistry and Poems of SUN RA.” Carmack reflecting on his work with Booth over the last couple of years as poet, MC and journalist said, ” It has blown by so fast, I hardly noticed its been almost 3 years since I appeared with Booth and another McCoy Tyner alumnus, AZAR LAWRENCE in a fast and powerful group of musicians performing compositions of McCoy Tyner. (Roy McCurdy, Theo Sanders,Azar, Juini and Robert)

Last year we did another Sun RA project focusing on mostly all of his “Space is the Place” material and music. carmack added, This time as part 2. I went deep on his Berkeley sessions at the University’s Artist-in-Residence, 1971,period of writings. Black nationalist views on African-Americans, politics and culture.” Carmack, a jazz journalist, actor and writer that focuses on the legacy of this genre called, jazz or American Black Classic Music.  Along with Carmack and Booth, were L.A. based sidemen, Mahesh Balasooriya on Piano, and Guillermo E. Brown drums. Brown performed last year with Booth and Carmack at the Club Zebulon, along with improvisational group, L.A. FOG and Kathleen Kim.

The audience not only heard rare Sun Ra Poems to improvisational interlude phrases by the group, but heard the band play pieces that they all favored in performing, like Jackie McLean’s “Melody for Melanie” and “Angels and Demons” by Sun Ra. A very powerful, moving solo bass, plus Loop were performed by Juini Booth to a standing ovation.

Carmack was able to navigate and sail around the writings with the ease of a skilled actor performing Shakespeare’s greatest montages of prose and poetry.  There were certainly fireworks with Juini Booth eclectic playing and melodic approach to double bass. Balasooriya treated the surprised audience to a searing piano solo on an unnamed piece he interpreted.

Carmack is based in Southern California and Juini Booth in New York. Carmack is setting up plans now as everyone gets ready for Spring and Summer events in both thriving cities. We want to redo this show in New York and San Francisco bay area as well. There are current calls for more study at the academic level for the writings of Baba Sun RA, along with his music and lecture series too.” said a jubilant Carmack, as he spoke to more collaboration projects that involve Booth and other Jazz icon’s music and writings.

Many thanks to the World Stage and Executive /Artistic director Dwight Trible and staff for making the group feel at home.

One thought on “JAZZ BASSIST AND POET DELIGHTS L.A. AUDIENCES IN DEBUT”