Award-winning Playwright and Poet, Tu’Nook has been tapped to direct the Theatre Perception Consortium’s production, The Club Alabam. It was announced recently by Robert J. Carmack, company Marketing and Media Consultant.
Tu’Nook is an educator,performance poet,playwright and actress. She has been published in Guild Press Anthology,  “Full Circle Eight”, UCLA’s Black English Student Association Journal “TAZ” and, in the anthology, “Butterflies” on the Wind from Hunan/Guild Press Publishing House in China. Tu’Nook also has performed in various poetry venues and theatrical projects in Southern California. 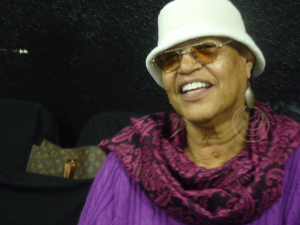 She is a co-author of the stage play, “Sweetwater Blues”, “DaRoot”, “Return”, and “North On South Central”. a 1940s jazz musical that was a 2004 NAACP Theater Award winner, Howlin’ Blues and Dirty Dogs(the life of Big Mama Thornton) a 2010 NAACP Theater Award winner, and the “Fiancée of Voo Doo. (an African Folktale)
While she takes her work in theater very serious, she still have…