Growing up in Los Angeles 1961, I was just learning  about real jazz . One day while listening to a new local radio station(KBCA FM),  I heard a brassy/soulful sounding tune that didn’t sound like the “Pink Panther” style  or Louis Armstrong type jazz  a D.J. named,Johnny Magnus would play daily on KFI AM. I was listening to a new group out of Houston called the Jazz Crusaders. They performed this hip ditty called Tough Talk, (title track) off the album on World Pacific Jazz label.  I recognized that brassy sound as a trombone, because my brother played one in school. I soon heard it again on the radio, this time the jock said who played what; Wilton Felder saxophone, Joe Sample piano, Stix Hooper on drums, and on trombone, Wayne Henderson!  Another note that made them stand out was the pianist, Joe Sample  making  a 17th Century instrument, the Harpsichord, sound hip and cool…a first in jazz sounds for me.

Wow! Even though I liked the saxophonist Wilton Felder, that “T-bone sound” just dominated the whole group.  I grew up listening to all of their recordings on World Pacific Jazz from the 1960s.  I learned all of the nuances of the Jazz Crusaders signature-sound that became the epitome of the new hip sound of jazz.  They was starting to dominate on jazz radio and festivals around the country at that time.

By fusing elements of jazz, Funk, Soul, R&B, Latin, and Gospel, an iridescent sound emerged with such impact that a musical revolution was unearthed. As the quartet’s cornerstone, Henderson’s objective was to accentuate the straight-ahead (often restrained) jazz sound with other musical styles that, ironically, are the offspring of  classic jazz.  https://www.youtube.com/watch?v=KYckwpsJ24o

As a result of exposure to all of the above-mentioned forms while growing up, Henderson’s transcendent appreciation for all musical elements compelled him to subconsciously or otherwise express those nuances in live performances and on recordings.  https://www.youtube.com/watch?v=jlKKMeDosl4

Henderson, a TSU (Houston) alumnus who  resided in Los Angeles, had always focused on the new generation of musicians and singers. He felt that to keep pace with progressive music styles required a stretching of the boundaries of traditional sounds, just as it was for Miles, Coltrane, Parker, Blakey, and Ellington. Their innovations were updated versions of previous musical forms, but with their own ‘twists’ and flavor. Due to their popularity, at times during my high school days in mid-late 60s, it seemed like the Jazz Crusaders were the HOUSE BAND at the famed ,Lighthouse Jazz Cafe in Hermosa Beach, California.  https://www.youtube.com/watch?v=mwDosjXKmXI

It was there I was able to approach Wayne and ask questions about music, and secure introductions to the rest of the members.  Even though the “original four” (Wilton, Joe, Stix and Wayne) were equal in status, it was Wayne Henderson’s outgoing personality and keen vision as to where they wanted to go creatively that stood out.

After a whopping five decades as a band member, producer, leader and individual, producing along the way countless hits, awards, major recognition nationally and internationally across all genres.  Wayne refused to rest on his laurels. 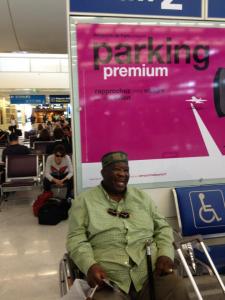 Wayne “Big Daddy” Henderson augmented his career by producing and recording with other notable acts: Patti Austin, Jean Carne, Bill Withers, Ronnie Laws, Ramsey Lewis, Steely Dan, Bobby Lyle, Everette Harp, Phillip Ingram, Nathan East, Lenny Williams, Rebbie Jackson, Marvin Gaye, B.B. King, the Jackson Five, Hiroshima, Hugh Masekela, Joni Mitchell, Wilton Felder, and Tina Turner, to mention a few.        https://www.youtube.com/watch?list=RDkBPi-kERN5Q&v=kBPi-kERN5Q    Most of Henderson’s independent projects were produced under his own LA based labels, At Home Productions and Angel City Records. Though he is survived by all three of the original four members from Houston,Texas, he definitely will be sorely missed. Lucky for us fans,there is a tremendous body of work left behind by the Jazz master and a bevy of artist who were influenced by his creativity . (shown below l-r:Joe Sample,Wilton Felder and Wayne “Big Daddy” Henderson, “Stix” Hooper not shown)