With the temperatures topping 90-100 degrees most Angelenos were seeking some relief from the heat, and that came in the form of  Jazz guitarist, Jacques Lesure and his Quartet. The former Detroit native, now L.A. based musician, Cooled off the audience with a great playlist of originals and standards including a very soothing ,but swinging title track , “When She Smiles” from his current CD.

The first set was kicked off with a ” Road Warrior” of a composition, the great Wes Montgomery’s Road Song. The sun glasses and wine crowd was treated to some great playing  by Lesure and his men. Especially on a golden composition by musician/composer, Eric Wyatt, “If Only I had Known” I was particularly impressed with Aaron Provisor’s sublime piano solo on this composition along with Revis ‘s bass playing. Jacques had everyone up and on their feet with Kenny Burrell’s  “Dusty gem of a Boogaloo back-beat jam called “Chitlins Con Carne” for a first-set closer. That’s when Jacques really displayed his Motown-roots and had his guitar “talkin” that talk!” 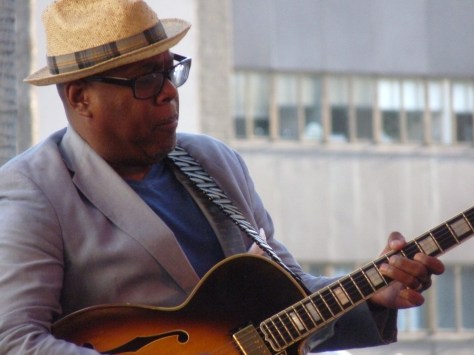 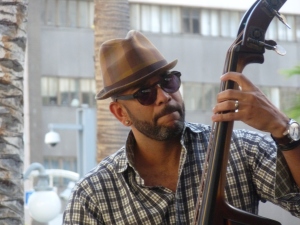 There were smatterings of old and young people dancing near-by to the melodious music being performed.   Jacques have in a very quiet way established himself, not only as one of the great ones to watch here in Los Angeles , but on the East Coast as well. This has been attributed to his bi-coastal travel and sideman activities with established Right-Coast groups.

Since i have followed Jacques career pretty closely since the late 90s when he co-led a group in Atlanta called The Swing Association or TSA for short. a group of well educated musicians and steeped in “Meat & Potatoes Jazz”  in other words, definitely swinging and bluesy with Swag!

One can only hope that, there are more groups like the Jacque Lesure  quartet on the way to rescue LA from itself. which is.. well, sometimes they fall victim to fads and fru-fru when it comes to real jazz under the “guise, that Its what sells”. Thank God for Art patrons who fund these art programs, so the county of Los Angeles can put them out. A few musicians get to eat and pay a bill or two.  The next time you’re in Los Angeles or, will be traveling in, check out the website of Jacques Lesure .

Or, better yet check it out anyway, He just may be coming to your town or city..  You might even “dance for joy” when they finish!