The Hub City Pride organization recently held an “Old School Dance & Show at  the new Ascension Ballroom in Compton,California. The “Home Grown Series is all about Compton’s Own helping one another and promoting “Goodwill”.  Compton is also known to many past and present residents as “Hub City”. HCP , headed up by longtime Compton resident Keith Bernard, has partnered with close friends Mahlon Potts and Art Levias to promote social  and business events  by people who grew up, went to school or established a longtime residence in the Hub City . One of the small business owners, Bludso’s Bar-B-Q of Compton and L.A., decided to lead the way by co-sponsoring the event at their new  entertainment facility adjacent to their Take-out eatery located at 811 S. Long Beach Blvd. Compton(Hub City) California.   Kevin  Bludso & the Bludso family are aggressively leading the way for other merchants in the city to invest more into Compton’s future  and help restore the pride and  sense of community . Not just have giant chains coming in and smothering, but actually partnering  with the small businesses to enhance their success as well. Hub City Pride is to be commended on  working towards that goal.

Being  that this writer grew up in Compton and  graduated from Centennial High School in the glory days before high crime and gangs chased away many businesses and residents. I was very curious.  It’s a new day and groups like HCP are reaching out to alumni from the three  Compton City High schools (all years) and recruiting them to assist by physically supporting  small businesses or referring their friends who are still living in Compton or near by. With over 1500 members and counting, there’s nothing left but, to succeed.  I had a great time just going around the room and talking to different people and, getting their perspectives on what they thought about the new facility  and Bludso’s future  remodeling plans. Their reactions were overwhelmingly positive.    http://www.bludsosbbq.com/

I was quite impressed with the show portion of the evening’s activities, as we were quite entertained  by comedian, SCREW and Starbrite Productions featuring vocalist, composer,musician  Anqui  Heming.  An assortment of  choreographed dancers and a hot band with very talented backup singers, that took us into the late evening, with all of this embellished by a hip lady DJ. 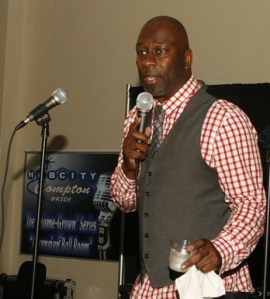