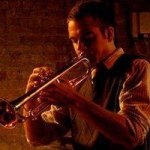 Tina Brooks was no-nonsense, muscular tenor saxophone player of the Hard Bop era. He could effortlessly alternate between tenderness and raw ferocity, often within a few bars of the same solo. Admired by his peers but largely ignored by the public during his life, Brooks’s limited body of work is now starting to gain appreciation among the jazz collective.

True Blue (released in 1960) was Brooks’s only album as leader to be released during his lifetime. Backed by the veteran rhythm section of Art Taylor (drums), Duke Jordan (piano), and Sam Jones (bass), Brooks and a fiery 22 year old Freddie Hubbard (trumpet) romp  through five Brooks originals and one standard, “Nothing Ever Changes My Love For You.”

As a composer, Brooks fit perfectly into the Blue Note sound of the late 50’s and early 60’s. His tunes are a thoughtful amalgamation of the intensity of the Jazz Messengers, the catchy phraseology of Horace Silver, and the melancholy introspection of Charles Mingus.
“Good Old Soul” opens up the set with a haunting, bluesy horn line and funky bass line, doubled up by Jordan’s left hand. A Latin-tinged bridge and restatement of the main set up Brooks for a passionate, wide-ranging solo. “Up Tight’s Creek” highlights Brooks’s originality and “adventurous-ness” as a composer. The melody weaves its way through a “bop-ish” main section, taking a brief detour through a quasi-calypso beat set up by Taylor. “Theme for Doris” undoubtedly pays homage to Silver’s “Nica’s Dream.” Although Brooks’s solo is a bit meandering, the beauty of the form’s harmonic backdrop makes for enjoyable listening.
“True Blue” and “Miss Hazel” are easily the two highlights of the album. The former showcases Brooks’s deep understanding of the blues. A wailing horn line is perfectly complemented by a rumbling bass background executed by Jones and Jordan. Hubbard shines on “True Blue,” combining gut-bucket statements with brilliant double-time phrasing. “Miss Hazel” features Brooks and Hubbard blending beautifully on an uptempo theme. Brooks’s solo shows both his virtuosity and emotional sensitivity as he blazes through the tune’s complicated chord structure.
“Nothing Ever Changes My Love For You” once again demonstrates Brooks’s arranging preference to alternate Latin beats with hard swinging melodic phrasing. His solo plays off of the melody’s hopeful tone, mixing in some passionate upper register wailing for good measure.
The Rudy Van Gelder edition offers alternate takes of “True Blue” and “Good Old Soul,” giving additional insight into the group’s conceptualization of Brooks’s writing.
Tina Brooks was a short-lived but compelling Blue Note artist, and True Blue is a testament to his enduring artistry.
This post was contributed by Denver-based musician and blogger Justin Scoville. He maintains his own website www.thejazzdaddy.com, He also contributes actively to jazz blogs throughout the Denver area.