John Patton, often known as “Big John” Patton, was one of Blue Note Records most active soul-jazz organists during the golden age of the Hammond B-3s. Between 1963 and 1970 Patton developed 11 albums’ worth of material as a leader and “sat- in” with an enormous procession of skilled improvisers. Arguably his best work has since been compared with that of  innovator Larry Young.

Patton was born in Kansas City, MO, on July 12, 1935. His mother was a church pianist who encouraged her son to learn the instrument. He began to play at the age of 13. During the mid-’50s, Patton worked in bands accompanying rhythm & blues singer Lloyd Price.    By 1961, he had switched over to the organ, advancing along the trail blazed by Jimmy Smith, Shirley Scott, and Brother Jack McDuff.   It was alto saxophonist Lou Donaldson who initially took Patton the organist into a recording studio first on May 9, 1962, to tape an LP to be called The Natural Soul, then on January 24, 1963, a lengthy session that yielded enough material for the albums “Good Gracious and Signifyin’.”

On February 2, 1963, Patton sat in  on Jimmy Smith’s Rockin the Boat session  playing only a tambourine. He spent the rest of that year making great music as a leader and sideman, jousting ideas and energies with his close Blue Note collaborator guitarist Grant Green (on the album Am I Blue?) and with saxophonists George Braith (on Patton’s Blue John), Harold Vick (on Steppin’ Out!), Johnny Griffin (on Soul Groove), Don Wilkerson (on Shoutin’), and Red Holloway (on Burner). 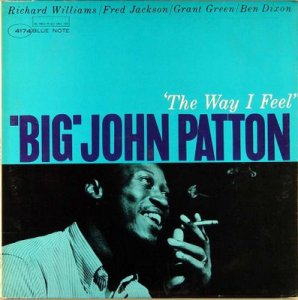 After 1970 Patton quit the scene for a long while, quietly residing in East Orange, NJ. He contributed to vibraphonist Johnny Lytle’s Everything Must Change in 1977, recorded his own Soul Connection in 1983 with guitarist Melvin Sparks and visionary trombonist Grachan Moncur III, then cut two albums with guitarist Jimmy Ponder: Mean Streets: No Bridges (1987) and Jump (1988).

Big John Patton’s comeback began in 1993-1994 with two albums featuring saxophonist John Zorn: Blue Planet Man and Minor Swing. Here he touched upon edgy ground similar to that which he had explored in 1968. His last major album, This One’s for J.A., was recorded in December 1996. On March 19, 2002, 66-year-old John Patton succumbed to diabetes and renal failure. Overshadowed by organists who for one reason or another enjoyed greater popularity, and still underestimated by many jazz critics and historians, Patton and his recorded legacy are ripe and ready for open-minded reevaluation~info courtesy of blue note records.