The Charles Owens Quintet Live at The “MERC! “~ Temecula California.

In a recent concert in Temecula, California at the famous “Merc” performance venue, veteran Jazz artist and saxophonist, Charles Owens appeared with his Quintet.

Owens, a Los Angeles based musician performed two very stellar sets for a jazz hungry audience. Being familiar with that music space,  I was able to get there early before the first set to grab a quick chat with the quite humble saxophonist. He shared with me many anecdotes and road stories along with who played a major role in influencing his play,style and approach. “As far as influences, Charlie Yardbird Parker and Wardell Gray for sax. The Modern Jazz Quartet and Art Blakey Jazz messengers in how I approach the music as a player or bandleader.” said a relaxed Owens. “But, I enjoy leading my own bands,however, I really loved my experiences playing with two iconic big bands. Duke Ellington’s Orchestra under the direction of his son, Mercer Ellington and the great Count Basie band.”

This particular evening’s affair was very special to him as he’s performing with some old friends and solid jazz musicians. On the bandstand with Charlie were bassist, Henry Franklin,friends for over 40 years, Pianist Theo Saunders,whom he met in L.A. in 1977, veteran drummer Don Littleton, over 30 year relationship and his old bandmate from the Basie band, trumpeter Scotty Barnhardt, current Director of the Count Basie Orchestra. 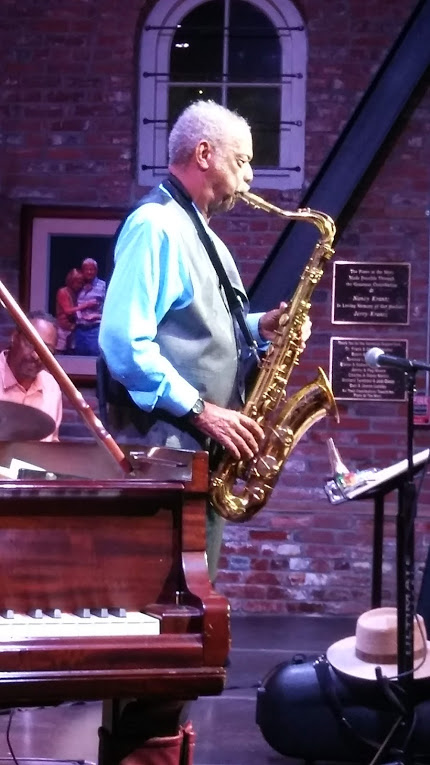 The SRO crowd were treated to a plethora of popular compositions, all performed with Charles Owens unique touch. First set opened with a Owens original entitled Wild Fire , a fiery piece with a great melodic line and solid enriched harmonies. Charlie and Scotty took some blistering solos, especially Barnhardt who weaved webs of delightful, above the line flurries of notes on his custom built trumpet. That was followed up by a lovely version of the perennial fave, Embraceable You. Barnhardt offered great artistry and sublime technique on this classic ballad. The Quintet quickly moved on the moment by playing a Sonny Rollins tune, Airegin (Nigeria spelled backwards) In my opinion, Scotty conjured up memories of icon, Woody Shaw as he peppered a white-hot solo. That song’s conclusion morphed into Ellington’s Take the A-Train! which ended the first set.

Highlights of the second set included equally great compositions by legends like Freddie Hubbard, Billy Strayhorn,Dizzy Gillespie with a surprise finale of the rarely heard cut, Don’t Get Around Much Anymore. This was quite the treat for me and the audience as Barnhardt reached into his magic bag of techniques and growled at the audience with his “Plunger” mute and choked notes..

Charlie Owens reputation as one of the most gifted and versatile musician in Los Angeles since 1972. Part of the attention had  to do with his craftsmanship with drummer Buddy Rich Big Band and latin great, Mongo Santamaria. In addition he added stints with English Blues King , John Mayall . Owens told me he was whisked-away from Mayall by music iconoclast, Frank Zappa.  Whether he’s asked to appear in a Oscar-winning film LA LA Land or staying fresh and current by working with young musicians on various bandstands, or teaching a weekly class at UCLA’s Herb Alpert School of Music. “During the break of the second set, he told me the reason he chose Frank Zappa. “I found Frank’s music more challenging than Mayall’s,.. I could have easily made more dough, but the challenge was calling me, as Zappa’s music was unique and quite eclectic.

Charles Owens was born in Phoenix, Arizona, grew up in San Diego California. One of his closest friends growing up was ,the late saxophonist Arthur Blythe or AKA, Black Arthur.”

Throughout the course of the evening’s performances I witnessed what most people always conclude, this is a very passionate player and humble almost to a fault. at one point in the second set, Owens and Barnhardt engaged in old-fashioned BeBop playing, to a song by Dizzy entitled the same, BeBop. the tune showcases long arpeggios and multi-note phrasing on top of mercurial-chord changes, played at break-neck speed by the entire band. At times, the rhythm unit of Franklin, Littleton and Saunders were like a giant bellows machine, stoking the coals to unheard of Fahrenheit-levels to the soloists.

Today’s young players can learn a lot from Uncle Charlie Owens. Even saxophone sensation, Kamasi Washington took a class or two at UCLA with Charles while eventually tweaking his already big sound and approach on his horn.  Whether you experience Charles Owens in a Big Band setting or a small combo, one thing for sure is, You will never forget that moment in time.