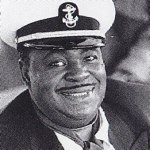 CHICAGO, IL  – Marvin Junior, lead singer of  Soul group The Dells, was cremated Wednesday (06-05-13) after a sudden death at his home last week.  Junior, 77, died on Wednesday, May 29, 2013, with family members bedside at his home in Harvey, Illinois  from complications associated with kidney failure. Born January 31, 1936, in Harrell, Arkansas.
Both parents preceded him in death. Junior was the oldest of four siblings: Nathaniel Dabon (deceased), Melvin Dabon (deceased) and, Jack Dabon. He moved to Harvey, Illinois, when he was only six months old, and was raised by his mother, maternal aunt and her husband, Frankie and Bill Boylen. Junior’s musical development was rooted in the church, where he participated in the choir at a young age. He attributed his talent and love of music to his parents; his voice from his mother who sang in a spiritual group, and his father who played guitar. When asked who else inspired him, he said, “We listened to groups like the Moonglows, the Five Keys and always Ray Charles.” By the time he was 14, singing emerged as his passion.
Junior married his  true love, Ruby Caldwell in 1960. During their 53-year marriage, they had six children, and 12 grandchildren. When asked why some of his contemporaries, other male entertainers, struggled and did not have the support they needed during their elderly years, Junior commented, “Marrying the right woman, a good woman, like Ruby makes all the difference. I married the right one.”
As a teenager, he helped form the musical group which would become The Dells, who would go on to perform  over six decades and sell millions of records. Often considered the most enduring and endearing vocal group in music history, beginning their recording career as the El Rays. Soon after, they re-named themselves,The Dells. Mentored by Harvey Fuqua of  The Moonglows  on five-part vocal harmony and gaining experience as background touring singers,
The Dells recorded the original “Oh What A Night” written by Marvin Junior and Johnny Funches in 1956,  their first big seller.The rest as they say is musical history. Marvin Junior without question, have left a strong and vibrant legacy in the pantheon of soul and popular music.