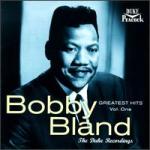 Lion Of The Blues: Celebrated And Laid To Rest  posted by Robert J. Carmack

MEMPHIS – Funeral services for soul-blues singer Bobby “Blue” Bland were held Thursday, June 27, at First Baptist Church in Memphis ,Tenn. Family, friends, colleagues and dignitaries from near and far gathered at First Baptist Church in Memphis to deliver Bland’s praises, listen to his tunes, and mark the passing of a Memphis music giant. The 2 1/2-hour memorial proved a stirring celebration of the life of the veteran R&B singer, who died Sunday June 23, age 83 at his home in Germantown, Tenn. #MEMBERS ONLY

The Bland family decided to allow the public to “share in the celebration” of the singer’s life by streaming the services live. It was not one, but a multitude of Bobby “Blue” Blands’ who were hailed and mourned during the  funeral services at First Baptist on Thursday.To some, he was the “pearl of the blues world”; others, a singer whose artistry was not limited by any single genre or form, but always a man with an abundance of charisma. Bland was remembered as a devoted husband, father and grandfather, but most of all a good friend;to those whom he knew and loved him.

The Blues singer’s casket was flanked by a bevy of colorful wreaths, family members, including  wife, Willie Mae, at the front. A procession of speakers came to the church’s pulpit to tell the story of his life and legacy.Spearheaded by the Rev. Jesse Jackson , as he spoke about his long relationship with the singer, which began five decades ago in South Carolina.

He and his wife were just newlyweds when they went to see Blue Bland perform. “For more than 50 years he’s remained relevant..Bobby was a singer, but no one adjective is enough,” said Jackson. “Validated by his fans and peers, Otis Redding, Wilson Pickett, the Allman Brothers and Elvis Presley, all of them looked up to Bobby ‘Blue’ Bland.”

“Today, death has been robbed,” continued Jackson. “It has taken his frail body, but has not taken the crown prince of melodic music. You belong to us forever, Bobby.”

Former Stax Records executive/producer, Al Bell talked in detail about Bland’s musical contributions, charting his career from his earliest Duke sessions to his ’70s work on ABC, to his later efforts for Mississippi’s Malaco Records. Bell noted that though all the years, changes and albums, the singular spirit in Bland always shined through. “I love the spirit that lived in Bobby ‘Blue’ Bland. And the spirit that lived in that body influenced us through its music, its thoughts, its contemplations and considerations for 83 years,” said Bell. “What a blessing!”

“Even though Bobby Bland is gone, you still can experience that spirit by just listening to his recorded music. You will experience the spirit, the care and love, the power and the glory.”  In attendence at the services were, local politicos who also paid their respects, with former Congressman Harold Ford Sr. and Shelby County Mayor, Mark Luttrell among those paying homage.

Former Memphis Mayor Willie Herenton also evoked one of Bland’s signature tunes while reflecting on his passing. “Bobby’s soul had to move,” said Herenton. “You know, Bobby left us with a song: ‘Further on Up the Road.’ Well, just a few days ago, Bobby moved a little further on up the road.”

Fellow musicians, including Stax songwriter David Porter, also shared personal insights. Porter told how he and his partner Isaac Hayes included a winking tribute in their classic 1967 hit “Soul Man”, by having Sam & Dave singer Sam Moore do a couple of Bland’s signature vocal “squalls” on the track.

Blues Foundation president Jay Sieleman reflected on Bland’s enduring musical impact, recalling how just this spring the singer was given the state of Tennessee’s highest cultural honor, the Distinguished Artist Award. While the recognition is typically reserved for those in the “fine arts” category, Sieleman noted that Bland represented the finest in any art form, praising him for his “exceptional talent and creativity.”

The most halting moment of the ceremony, however, came near the end, as Bland’s fellow music legend and lifelong pal, guitarist B.B. King, rose from the pews to briefly address the audience. “If it’s possible that I see him again, I’ll have some (wise) cracks for him, which we always had whenever we met up,” said King. “Bobby, I miss you, old boy,” he added, looking toward Bland’s casket. “He was my friend.”