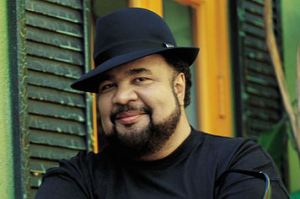 It was announced by a handful of web-based news reports stating award-wining pianist/producer George Duke has died. Most reports indicated the death of 67 year old Duke was called late evening  August 5,at St. Johns Hospital in Los Angeles,California.

“Former Supreme’s member, Sherrie Payne states: “I just received the devastating and sad news that the great musician, George Duke, passed away this evening at St. John’s Hospital in LA”

No word yet on what happened but, we will keep you posted. Duke just completed an album and was in the process of promoting it after losing his wife. It was just one year earlier, July 18th, that his beloved wife and best friend, Corine passed.

George Duke is an accomplished keyboardist, producer, arranger, bandleader, and composer. He has been successful in both popular music and jazz, and has straddled both sides of that aisle for most of his career. Duke grew up in Marin City, California, and in high school played in his first jazz group. His early influences were Miles Davis, Les McCann, and Cal Tjader, all of whom played a role in the diversity of his composing, playing, and arranging. After graduating from high school, he attended the San Francisco Conservatory of Music and majored in trombone and composition with a minor in contrabass; he received his bachelor’s degree in music in 1967. He continued his studies at San Francisco State University, where he earned a Master’s degree, and briefly taught at Merritt Junior College in Oakland. While in school, Duke was part of a house band at San Francisco’s Half Note with Al Jarreau. The band backed some of the biggest names in jazz, including Sonny Rollins and Dexter Gordon.

He also began his recording career in 1967 while still in school. His first recording, The George Duke Quartet, Presented by the Jazz Workshop, was released on Germany’s Saba imprint, which later became MPS, a label he enjoyed a fruitful relationship with in the ’70s. In 1969 Duke heard a record on the radio by French violinist Jean-Luc Ponty, and through his relationship with Pacific Jazz honcho Dick Bock, he was able to make contact with Ponty; they eventually recorded The Jean-Luc Ponty Experience with the George Duke Trio in 1969.

The band played a slew of club gigs in the Bay Area, and at one such performance he was heard by audience members Frank Zappa and Cannonball Adderley. He was invited to join Zappa‘s Mothers of Invention and accepted, spending much of 1969 and 1970 with him.

In 1975 he worked with Sonny Rollins and co-led a group with Billy Cobham. Throughout these years, Duke recorded six albums for MPS: Solus/The Inner Source, Faces in Reflection, I Love the Blues, She Heard My Cry, Feel, The Aura Will Prevail, and Liberated Fantasies, all of which are now regarded as jazz and jazz-funk classics. Duke signed to CBS in late 1975 and released his first solo album for the imprint, From Me to You, in 1976, and began scandalizing jazz critics with his inclusion of funk, disco, and soul elements in his compositions, and in the array of musicians who performed with him. In 1978 he recorded his breakthrough, the crossover funk album Reach for It; it took him into the upper reaches of the pop charts, and moved his concert appearances from clubs to arenas. Follow the Rainbow and Brazilian Love Affair both landed in 1979 and ran up the charts as well.

By the late ’70s he was also producing projects for jazz, pop, and Brazilian artists including Raul de Souza, Dee Dee Bridgewater, and A Taste of Honey, whose single “Sukiyaki” hit the top spot on the pop, adult contemporary, and R&B charts and went multi-platinum. Duke became a producer of note, going on to score hits with Jeffrey Osbourne (“Stay with Me Tonight,” “On the Wings of Love”) and Deniece Williams (“Let’s Hear It for the Boy,” “Do What You Feel”). Since then, production has played as large a role as making his own records — during part of the ’80s it almost surpassed it. Duke has produced a diverse range of projects — including records by the Pointer Sisters, Barry Manilow,Smokey Robinson, Melissa Manchester, 101 North, George Howard, Gladys Knight, Najee, Take 6,Howard Hewett, Chanté Moore, Everette Harp, Rachelle Ferrell (his key collaborator in the early ’90s),Gladys Knight, Keith Washington, Gary Valenciano, Johnny Gill, and Anita Baker — in a wide range of styles. Many of these records charted very high.
Duke began the ’80s with the first Clarke/Duke Project recording (with bassist Stanley Clarke) that netted his own number Top 20 crossover hit, “Sweet Baby” (number 19 Pop, number 6 R&B). He also released the solo works Dream On,Guardian of the Light, and Rendezvous as well as another Clarke/Duke Project album before leaving Epic for Elektra in 1984. There he recorded Thief in the Night, George Duke, and Night After Night. Duke‘s music delighted mainstream audiences and crossed over from pop to adult contemporary to the R&B charts effortlessly.     http://www.youtube.com/watch?v=4Vz-qArxJv0

The ’90s commenced for Duke with a third and final Clarke/Duke Project recording before he signed to Warner Bros. upon the courting of legendary label boss Mo Ostin. While his debut for the label, 1993’s Snapshot, hit the charts because of its smash single “No Rhyme, No Reason” (sung by Ferrell), the biggest surprise for audiences came later, in 1995, with the release of The Muir Woods Suite. A large jazz concept work, it was recorded live at the Montreux Jazz Festival with Duke playing keyboards, Clarke on bass, Chester Thompson on drums, and Paulinho Da Costa on percussion fronting a symphony orchestra.

It was actually recorded in 1993, but Duke spent two years “fixing” the tracks before it was released in 1995; he has since performed it numerous times in concert. Jazz critics who had long derided his pop success and wrote him off suddenly took notice again. Duke, however, was courting no one. In 1996 he released Illusions and nailed another single in the Top 40 with “Love Can Be So Cold.” Some of the players and singers featured on the album included Ferrell, James Ingram, Joyce Kennedy, Mervin Warren, Marvin Winans, the Emotions, Lori Perry, and Everette Harp.

Duke finished the decade with a string of albums for Warner including a second concept work, After Hours, before leaving the label after 2000’s Cool.

Duke threw another change-up in 2002 with Face the Music, issued on BPM. He played mostly acoustic piano on the date — something he hadn’t done in years — and used the same core band on the entire recording (another rarity). His main sidemen for the date were bassist Christian McBride, drummer Lil’ John Roberts, and Jef Lee Johnson on guitar.

Though there are other instruments and players, these men appear on every track. The album Duke was released in 2005, a hodgepodge of music he’d left off other projects. In 2006 he released In a Mellow Tone, a more traditional jazz album with Brian Bromberg on upright bass and Terri Lyne Carrington on drums, and the jazz critics took notice once again.

Dukey Treats appeared in 2008 from Heads Up Records. Duke returned to jazz-funk and R&B for 2008’s Dukey Treats, on Telarc, once more using singers and a slew of musicians. It was followed by Déjà Vu in 2010.

In 2012, he produced Jeffrey Osborne‘s Time for Love album (released in 2013). During the sessions, Duke‘s wife of 40 years, Corine, died from complications due to cancer. After some time spent away from music in order to properly grieve, he entered the studio in early 2013, and recorded Dreamweaver, which was released in July of this year.