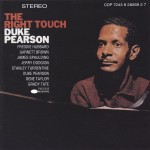 Jazz pianist and composer who also had experience as producer,bandleader,arranger and A&R  man for Blue Note in the 1960s and beyond. His talent and perseverance help shape the Hard Bop  direction for Blue Note records.

“Even after 30 + years past his death, his legacy has to fight for any mention on broadcasts, books on jazz, and so-called jazz historian essays.”

The last few years,there has been rumblings of exhibits,Hall of Fame inclusion in Georgia, etc.so far,its only been conjecture and wishful thinking on the part of family members and fans. IMHO, Duke Pearson was too talented, and special to not be included in any Hall of Fame, museums or major jazz exhibits.Some of my favorite music in Jazz  just happens to be music composed, produced or arranged by Duke Pearson. Jeannine by Eddie Jefferson, & Donald Byrd/Pepper Adams group. The Phantom, Wahoo, Amanda, Sweet Honey Bee. I can hardly keep still whenever I plop on Rough N’ Tumble by Stanley Turrentine on Blue Note records,circa 1965. Pearson’s uncanny ability to conduct magic with large ensembles of 6-9 pieces, providing them with big band voicing and dynamics, thereby squeezing every ounce of soul out of the sessions he produced. The other aspect of Duke’s signature was his pick of the greatest musicians of the era,which mostly were on Blue Note or had recorded on blue Note sessions before. Anyway you sliced it, it always came out WINNER!!

DUKE was born Columbus Calvin Pearson, Jr. August 17 1932 in Atlanta, Georgia to Columbus Calvin and Emily Pearson. The moniker “Duke” was given to him by his uncle, who was a great admirer of Duke Ellington. Before he was six, his mother started giving him piano lessons, an instrument he studied until he was twelve.Then, he took an interest in brass instruments: mellophone, baritone horn and ultimately trumpet. He was so fond of the trumpet that through high school and college, he neglected the piano. He attended Clark College while also playing trumpet in groups in the Atlanta area. While in the Army, during his 1953-1954 draft, he continued to play trumpet and met, among the others, pianist Wynton Kelly. Pearson himself confessed in a 1959 interview that he was “so spoiled by Kelly’s good piano”, that he decided to switch to piano again  Also, it seems that dental issues forced him to give up brass instruments. He continued to perform with different ensembles in Georgia and Florida, including with Tab Smith and Little Willie John, before he moved to New York City in January 1959.

In New York, Pearson gained the attention of trumpeter Donald Byrd, who saw Pearson performing with the Art Farmer/Benny Golson Sextet (The Jazztet). Shortly afterwards, Byrd asked him to join his newly formed band, the Donald Byrd-Pepper Adams Quintet. Pearson was also the accompanist for Nancy Wilson on tour in 1961. During that same year, Pearson became ill before a Byrd-Adams show, and  newcomer  Herbie Hancock took over for him. This eventually led to Hancock taking over the position permanently.

On the 1963 Byrd album  A New Perspective, Pearson arranged four tracks, including “Cristo Redentor”, which became a big hit. That song, Pearson later commented, was inspired by a trip he took to Brazil.  Also that year, after the death of Ike Quebec, Pearson took over his position as A&R man for Blue Note. From that year until 1970, Pearson was a frequent session musician and producer for numerous Blue Note albums, while also recording his own albums as bandleader. This was odd, since Pearson also recorded his co-led big band with Byrd for Atlantic Records, a stipulation he made sure was in his Atlantic contract.  The Byrd-Pearson band consisted of iconic musicians like Chick Corea, Pepper Adams, Randy Brecker, and Garnett Brown; the latter three were members of the Thad Jones–Mel Lewis band. Pearson’s compositions include the now standard, frequently covered “Jeannine”, composed in 1960, an early cover appears on  Cannonball Adderley‘s  album Them Dirty Blues (1960). 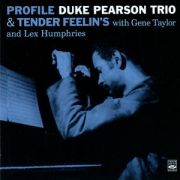 My favorite non-Duke version is by Eddie Jefferson’s (vocalese arrangement of Byrd/Pepper Adams cut from the Half Note sessions. Pearson eventually retired from his position with Blue Note in 1971 after personnel changes were made; co-founder Alfred Lion retired in 1967 after the label was sold to Liberty Records the previous year and co-founder Frank Wolff died in 1971. Pearson opted to teach at Clark College in 1971, toured with CarmenMcRae and Joe Williams through 1973, and eventually reformed his big band during that time.

He was diagnosed with multiple sclerosis in the 1970s, from which he died in 1980 at Atlanta Veterans Hospital He is survived by children, a host of family and long time friends, including peers from his long musical career  as innovator, producer and top shelf composer of jazz standards.