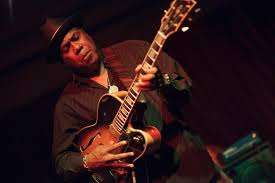 Guitarist, Jacques Lesure has performed with some of the greatest musicians in the world, Oscar Brown Jr., Stanley Turrentine, Wynton Marsalis , Les McCann to name a few. Tonight’s performances will feature new material from the maiden voyage debut of ” WHEN SHE SMILES” on the WJ3 Jazz label.

WJ3 is owned by highly-acclaimed jazz drummer Willie Jones III ,who also performs on the New CD. In addition to performing on the tracks as the pianist,Eric Reed handled most of the arrangements on the session. Lesure also chose to use the hot young bassist and recent winner of  the Thelonius Monk Institute’s competition Mike Gurrola . If you like your music to “swing like a gate,” Don’t Miss tonight’s performances.       No Cover –  Drink/Food minimum required.