Red Marine Entertainment Presents the OLD SCHOOL R&B LOVE FEST
SWITCH , SURFACE , GAP REVIEW  BALL HOOKER. (opening act..)
Real Old School Show: In Search of an audience.. I have been around or involved with the entertainment field for well over 50 years,music in particular. I know a good show when I hear or see one by individuals who really know what to to do with a chord or note. I was pleasantly surprised a few evenings ago as I sort of bumped into a great show. Just helping out my sister as a vendor at the California Education & Performing Arts Center in Ontario California,  11255 Central Avenue. Ontario,Calif.
RED Marine Entertainment recently presented an Old School R&B Lovefest… an evening of solid entertainment by classic Old School groups, Switch , Surface, The Gap Review(Tribute Band) along with opening act Kimball Hooker, male vocalist with some chops.. tagging and paying homage to artists like Keith Sweat.

DYNAMICALLY hosted by LA’s very own, ANGEL BABY – DJ Radio Host.
when you’re a vendor at these productions, you have to arrive early to load-in and get setup . get out of the way of artists moving in equipment, doing sound checks for next two hours. While I had lots of time on my hand, it also gave me an opportunity to move around , be curious as a journalist, as to who and what and why.
I chatted it up with some members of the various bands, production crews and VIP guests , who also arrived early for publicity pictures, video interviews and miscellaneous activities one does before show begins.
At first when my sister told me an old school show, my head automatically thought some mediocre wanna-bees. NOT!!
Listening to sound check of the various groups and singers/musicians, I quickly got a sense of “Oh Wow”, I just wish I had known about this show in advance.  I have my own opinions about that, but, leaving that to the side . Looking inside the cavernous hall with so many empty seats once the show began, I was shocked. Its like you and your lady or gent are all dressed up but no where to go. You just focused on how you looked and not how you were going to get there.
During the early to mid-’70s, Bobby DeBarge, Eddie Fluellen, Phillip Ingram (brother of James Ingram), Jody Sims, and Gregory Williams were in the Ohio-based White Heat, which subsequently morphed into Hot-Ice, an outfit that featured DeBarge, Sims, and Williams, as well as DeBarge’s brother Tommy. That band released an album on Polydor in 1977. Shortly thereafter, Jermaine Jackson helped them secure a contract with Motown offshoot Gordy. All of of this after a very awkward meeting in the Motown building in Hollywood.

As Switch, the band proved to be popular in clubs, as well as within the quiet storm radio format. Their singles “There’ll Never Be” (1978), “I Call Your Name” (1979), and “Love Over and Over Again” (1981) reached the Top 10 of Billboard’s R&B chart. Throughout the 2000s, the band’s recordings were sampled by the likes of De La Soul (“A Brighter Tomorrow”), Ne-Yo (“It Just Ain’t Right”), Rich Boy (“Throw Some D’s”), and Erykah Badu (“That Hump”). Ingram, Williams, and Fluellen reunited, added new members, and have been bringing down the house ever since!

The Gap Band Review pays homage to The Gap Band, which is one of the most popular funk groups of the late ’70s, ‘80s to present time.  15 Top Ten R&B singles ranging from ferocious funk anthems to gorgeous slow jams. Many of their hits, such as “Burn Rubber (Why You Wanna Hurt Me)” and “You Dropped a Bomb on Me,” featured instantly memorable, rippling synthesizer bass-lines.

The Gap Band’s  run of hits spanned nearly 20 years, from 1977 through 1995. Their hits continued with “Shake”, “Open Up Your Mind”, “Don’t Stop the Music”, “Yearning for Your Love”, “Early in the Morning”, “Outstanding”, the title song to Keenan Ivory Wayans’ “I’m Gonna Git You Sucka” and more!

I wanted to catch the SURFACE show but was too busy by the time they were onstage. the little I did hear, was simply off the charts.. They performed without a band just DAT and  Flute with strong vocals.. my cut Get Closer ..The ’80s soft soul vocal trio known for such lush ballads as “Closer Than Friends” and the million-selling singles “Shower Me With Your Love” and the number one pop hit “The First Time” had one of its first charting records as artists signed to dance music pioneer Salsoul Records. “Falling in Love,” co-written by Surface member David Conley, doesn’t have much in common with the aforementioned titles other than the group name and a (presumably) Conley flute solo. The single made it to number 84 R&B in summer 1983 and the U.K. pop charts. Singer Bernard Jackson who grew up in Stamford, CT, got into the music business through his cousin who lived in New York.
Seizing the opportunity, he relocated to New York and began performing around the city. While doing a show in Stamford, his godfather suggested that he contact his nephew David Townsend who was also in the music business. Townsend, a former touring guitarist for the Isley Brothers, was the son of singer/songwriter/producer Ed Townsend who had a hit with “For Your Love” in summer 1958 and wrote the Impressions‘ “Finally Got Myself Together (I’m a Changed Man)” and co-wrote Marvin Gaye‘s “Let’s Get It On.” Around 1973, Townsend joined a band called the Port Authority where he met David “Pic” Conley. Townsend, whose father shared hit songwriting tips with him, began writing songs with Conley. After Townsend and Conley met Jackson it was decided that they’d write songs together. The trio became staff writers for EMI Music. Their songs were covered by New Edition (“Let’s Be Friends” from their 1985 MCA LP All for Love) and Sister Sledge (“You’re So Fine”). The trio became performers using the name Surface and moved to Los Angeles. An EMI Music executive brought one of their songs, “Let’s Try Again,” to the attention of Larkin Arnold of Columbia Records. Arnold‘s previous successes include Natalie Cole and Peabo Bryson. He signed the group to Columbia and their first single “Let’s Try Again” charted number 80 R&B in late 1986.

The debut album Surface included the smooth and sweet “Happy,” which hit number two R&B for two weeks in early 1987, “Lately” (number eight R&B), and the reissued “Let’s Try Again.” The next LP, 2nd Wave yielded “I Missed” (number three R&B), “Closer Than Friends” (number one R&B for two weeks in early 1989), the wedding standard “Shower Me With Your Love” (gold, number one R&B/number five pop), “You Are My Everything” (number one R&B for two weeks), and “Can We Spend Some Time” (number five R&B). Jackson brought the sheet music to a song he had written in 1986 to his friend, songwriter Brian Simpson, who had a recording studio in his garage. After listening to the finished demo tape, Jackson thought that he had a hit. Hiring a mobile 24-track recording studio truck to capture his vocal in the best professional conditions, Jackson sang “The First Time” in Simpson‘s house. “The First Time” was the first single from Surface’s 3 Deep album and went gold hitting number one R&B and holding the number one pop for two weeks in early 1991. While “The First Time” was topping the charts, Surface was one of the presenters at the American Music Awards and were enthusiastically congratulated. The hits continued with “All I Want Is You” (number eight R&B, early 1991) and “Never Gonna Let You Down.” “You’re the One” billed as Surface featuring Bernard Jackson made it to number 24 R&B, summer 1991. The group’s last charting single was “A Nice Time for Lovin'” included on their 1991 greatest hits LP The Best Surface: A Nice Time for Loving. Conley and Townsend also produced sides on Rebbie Jackson (“Reaction”) that are on The Rebbie Jackson Collection from U.K. label Expansion distributed by Sony/3MV. 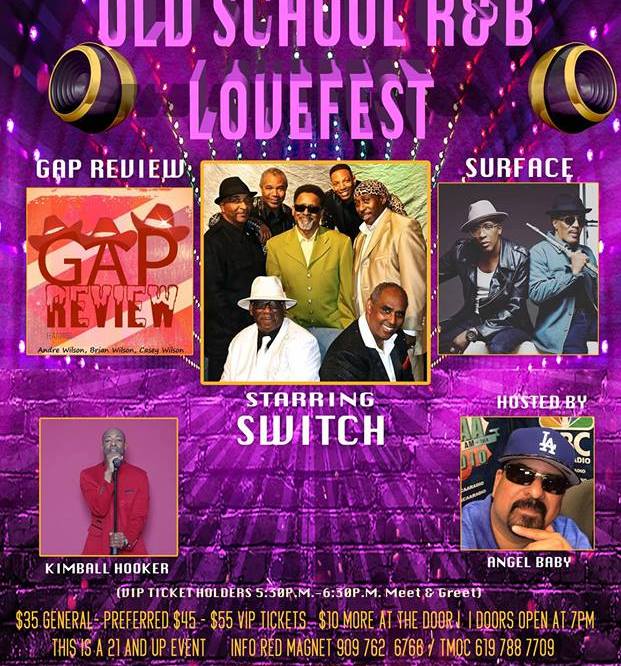